This is a brilliant guest post by Mr. Gnome from The Random Gnome’s Random Lair. For hours of computer- and retro-gaming goodness be sure to check out his site.

The digital world of Dungeons & Dragons

Truth be said, computers do face quite a few problems when striving to provide us with proper RPG experiences. That’s, I guess, why we needed this CRPG term. Just to make sure roleplayers never raised their expectations too much. On the other hand, them CRPGs do tend to handle combat particularly well, and if you’re a munchkin you don’t really care for the RPG part of RPG gaming, do you? Then again, you might care but lack the time to gather half a dozen people to play. And a good story always is a good story.
Anyway. Enough with the intro bit. What follows is a selection of 10 of the best Dungeons & Dragons CRPGs presented for your enjoyment in the rather rare reverse chronological order. 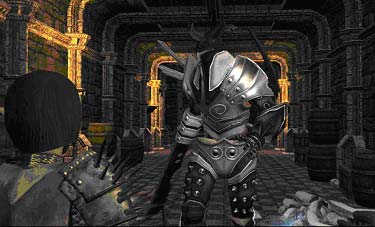 Following the original BioWare developed and immensely successful Neverwinter Nights, NWN 2 improved the game in every respect and provided us with a shining gem in all its action-focused, story-heavy, dungeon crawling glory. The visuals are nothing short of jaw-dropping, the music is superb, the available options ridiculously varied, the gameplay perfectly balanced and the plot appropriately epic, though admittedly quite a bit on the generic side of things. What’s more, and besides the replayability of the thing, NWN 2 can double as an impressive DM’s tool. Heck, there’s even a properly funny gnome bard thrown in for comic relief. Just remember to patch it before you start playing. Oh, and you’ll need a decent PC to enjoy it too.

The Temple of Elemental Evil 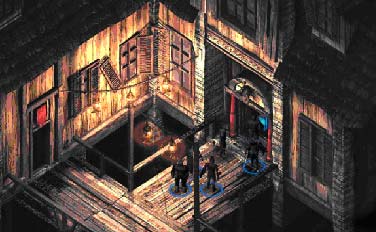 Troika Games, the developers of The Temple of Elemental Evil are apparently no more, and if you have actually played any of their games, you are probably very sad about it; just like I am. If not, you should be. After all, they are the only team to attempt such a faithful implementation of the 3.5 edition rules while recreating this rather classic D&D adventure. Ok, so the plot development isn’t brilliant with its standard evil rising theme and the game did ship with its fare share of bugs, but what really stands out, the turn-based combat system, will more than make it up for you. As for the party of five the player leads through Greyhawk, it interestingly has an alignment which affects both the plot and the available choices. Mind you, ToEE still has a vibrant, creative and very active fanbase, that constantly comes up with new bug-fixes, enhancements and extra content. 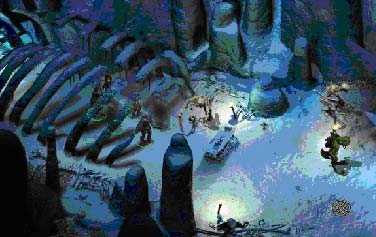 Yes, it’s an expansion for Icewind Dale, I know, but it’s such a glorious one it’s worthy of its very own mention. Changes include such things as the addition of several types of classic Dungeons & Dragons critters, a higher experience point cap, new magical items and the much needed option to play in a resolution higher than 640×480. Heart of Winter, with its basic though definitely grand plot, focuses on epic battles and intense (!) spell casting. Guess it’s something like hack-‘n’-slash for wizards really. Great fun and will last you for quite a while too. 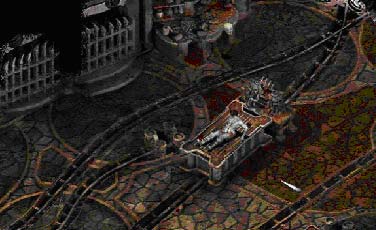 If there is one game that really (and I do mean really) puts an emphasis on storytelling, reading of extensive texts, plot twists, literary pleasures and non-combat focused gameplay, well, as you might have guessed, Planescape Torment has to be that game. Now, I do not want to spoil anything from its great story, but do know that there’s a brothel of intellectual delights to be visited, death plays a prominent role, the atmosphere is absolutely impressive and the bits of included humor actually work. After all, Planescape Torment, frankly, is way above the average D&D novel in terms of writing quality, character development and of course plot. It’s no Dostoyevsky of course, but no Salvatore (and I don’t mean that in a good way) either.
On the more mundane side of things, Torment is based on the Infinity Engine, meaning it features some of the best 2D environments possible and plays like a cross between an adventure and an RPG. Also, players don’t get to choose their party –it would definitely hamper storytelling- but they do get to pick some of the characters they’ll recruit and join a variety of factions from the Anarchists, to the Dustmen, the Sensates and more. 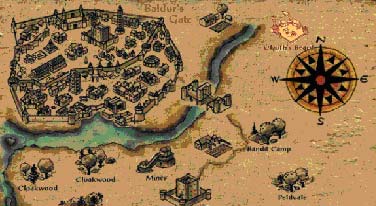 Baldur’s Gate, slightly flawed as it is, was the CRPG behemoth that kick started the genre renaissance of the late nineties and is still considered one of the best single player RPGs money can buy. The story is decent and, combined with the rich world of the Forgotten Realms, provides with the perfect canvas for character development and –admittedly- gratuitous goblin murdering. There are literally tons of battles, both random and staged, to fight, tons of dialogue to wade through and a moral system in the spirit of the game’s Nietzsche inspired slogan: “He who fights with monsters should look to it that he himself does not become a monster…”. Oh, and so you know, two of Baldur’s biggest key selling points were (arguably still are) the intuitive real time combat system and an absolutely huge quest taking place over the entire –and very lovely- Sword Coast. Now, care for a bit of trivia? Good. Baldur’s Gate actually is the name of the sprawling fantasy metropolis part of the game takes place in. 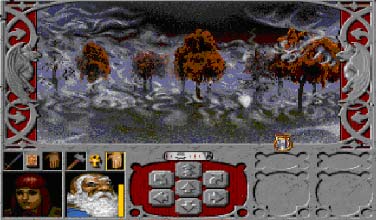 I remember feeling that weird sort of melancholy invented worlds tend to inspire when you realize they don’t actually exist when I first read through the original AD&D 2nd edition Ravenloft box set. It really was that good a romantic masterpiece, filled with incredibly powerful yet cursed characters, a dark history, imaginative realms and a deep sense of dread. Yet, I never played a Ravenloft session. Always thought it would have to be too epic to really matter. Well, Strahd’s Possession is epic. A bit too epic to be frank, and I do mean this in a setting altering way, but it still offers a passable story and a chance at some truly atmospheric computer gaming. Happily, it also offers a pretty innovative for its time full 3D world viewed in first person perspective and a healthy dose of dark gothic atmosphere. Oh, yes, and some appropriately cryptic Vistani too.

The Dark Queen of Krynn 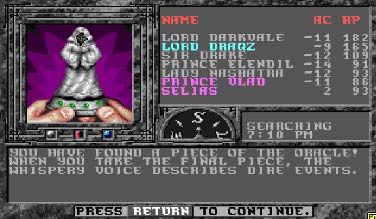 A classic. A true masterpiece. A technical achievement. A game that just can’t age and a brilliant dungeon hacking romp that enthralled (parts of) humanity and quite obviously me. Also the last installment in the Dragonlance based Krynn trilogy of games that were released as part of the aforementioned Gold Box series. Evil (well, the aptly named Dark Queen herself actually), you see, even after being defeated twice, just couldn’t leave Krynn alone and a band of adventurers just had to stop her. In a glorious 256-colours VGA world with SoundBlaster support, no less.

Eye of the Beholder 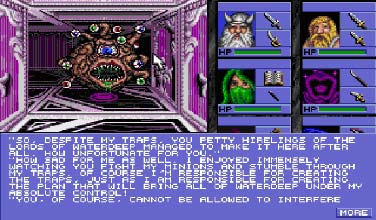 Another megahit and a respected award-winner from the era when gamers bothered with exercising their imagination. An era when pen and paper were the only way to map a game. Eye of the Beholder, not unlike Dungeon Master before it, was one of the earlier first person RPGs with a then-impressive 3D tile-based graphics engine. The title, as retro gaming CRPGers should remember, refers to the game’s final adversary, a nasty monster, gamers and their party of four would only reach after fighting a thousand battles, making friends with an assortment of dwarfs, murdering the odd Drow, casting roughly 40 different spells and solving lots of taxing puzzles in the sewers of Waterdeep. Eye of the Beholder was successful enough to spawn two sequels, quite a few spin-offs and port itself to everything from the Amiga and the Sega (Mega) CD to the Atari Lynx and the SNES. 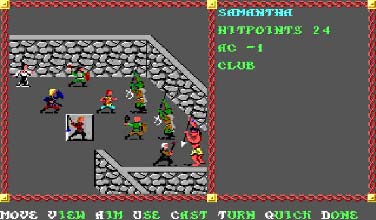 Pool of Radiance was the first of a long and brilliant series of RPGs that shared a common graphics engine and common gameplay mechanics, and came to be collectively known as the Gold Box series. Must have been the gold boxes in which the games came, methinks. Anyway. Point is, Pool of Radiance is a legend and a 20-year old game everyone with the slightest interest in CRPGs and their heritage should play, even though admittedly some of the later Gold Box games actually bested it. Still, not many of them received the accolade of being called “the best RPG ever to grace the C64, or indeed any other computer” by Commodore User magazine. http://en.wikipedia.org/wiki/Pool_of_Radiance – _note-0The game only allowed fighter, cleric, wizard and thief and severely restricted them in their level advancement, but its combination of first person dungeon exploring with 3rd person turn-based combat and the official endorsement of TSR made sure it was years before anyone actually noticed it. 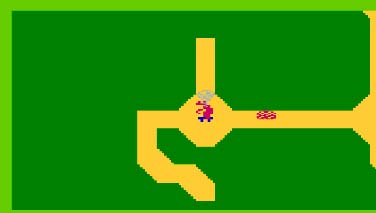 I’m not 100% sure on what exactly this Intellivision game is called, though its loading screen does imply that Advanced Dungeons & Dragons should be enough, but I do know it’s not the first D&D game ever. 1974, you see, saw the release of dnd, which being playable only on a mainframe failed to reach a wide demographic. Not that this game did, but, well, at least it tried. Originally being worked on under the title of “Adventure” until TSR licensed the game, AD&D was the first Intellivision cartridge to use more than 4kb of ROM and feature randomly generated mazes stuffed with monsters, in what could easily be described as Diablo’s great grandfather. I’d suggest tracking a copy of the thing online and actually seeing how impressively innovative it was. Finding a free copy shouldn’t be too difficult, even if your reward would have you recovering the two pieces of the rather silly-named Crown of Kings.

What are your top CRPGs?

Let us know what kept you enthralled for social-life-mangling weeks!

This was a guest post by Mr. Gnome from The Random Gnome’s Random Lair. For hours of computer- and retro-gaming goodness be sure to check out his site.