Why Bard is the Greatest Class Ever

Bards are unpredictable – this one always bring a barrel on adventures just to mess with the DM’s mind.

Here at Dungeon Mastering we try to foster a community where we can engage in intellectual discussion and all views are respected, even if not agreed with. One of the points of disagreement around here is the value of bards. One of my colleagues has a well documented anti-bard bias. Another has a less documented opinion that bards are crunchy and delicious. Well I intend to settle the argument right now, bards are the greatest class in D&D and if you don’t agree your opinion is wrong.

Let me break it down for you:

Bards are Indie: For many years and many editions the charisma attribute was cursed to joke status among gamers. One of the sole devotees of this underestimate stats were the bard class and they were ridiculed for it. Now that charisma has gone mainstream everyone is jumping on the bandwagon – we’re looking at you  4e Warlord, is 4e Warlock, and 4e Rogue. It’s okay though, charisma sold out so bards are not that into it anymore, they have a new ability score. They would tell you what it is, but it’s pretty underground, you wouldn’t have heard of it.

Bards Make Great Come-With-Guys: In an earlier article my bard-hating colleague asked the question “Do you really want me to ask a fighter surrounded by 6 orcs if he’d rather have back-up or hear a tune?”. Allow me to phrase that another way, how often in your life have you wished you had a soundtrack? If you were slicing up orcs left and right, wouldn’t someone shredding on a lute really get your blood pumping? I’ve never slaughtered monsters before, but I know I take my MP3 player every time I go to the gym. Lets say you get overwhelmed and can’t handle it, that bard is going to write a great song about you. He will embellish a bit, throw in a damsel in distress and a few dragons to the story and suddenly people will be singing your praises for years.

Bards are Selfless: So much of a bard’s power is tied up in making his friends look good. When you only dealt that dragon a killing blow due to the bard’s +1 bonus or just barely made that tumble check to avoid looking like an idiot thanks to some inspiring music, everyone just assumes it was your natural talent winning the day. The bard isn’t greedy, he doesn’t take credit for your victories or tries to steal your kills, he just helps you be the best you can be. Plus there is no better person for talking you up to guys or ladies you are interested in. 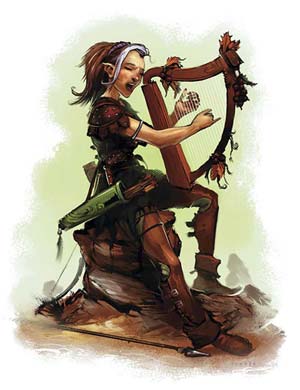 Bards Can Do Anything They Set Their Minds To: There’s a wonderful quote from the science fiction author Robert Heinlein “A human being should be able to change a diaper, plan an invasion, butcher a hog, conn a ship, design a building, write a sonnet, balance accounts, build a wall, set a bone, comfort the dying, take orders, give orders, cooperate, act alone, solve equations, analyze a new problem, pitch manure, program a computer, cook a tasty meal, fight efficiently, die gallantly. Specialization is for insects.” Except for programing a computer (they’re taking night classes) that sounds like it could be the resume of a bard. Bards might not be able to do a particular thing as well a specialist, but they can fill in any skill you are lacking and provide valuable assistance to your specialist in that field, two d20s are better than one!

Bards Annoy Your DM: Bards are a wonderful class if you like to frustrate your DM while he tries to tell a story. They excel at seducing the barmaids, prying info away from the DM with bardic knowledge, running afoul with the law and just generally mucking about the plot. Alternatively, if for some strange reason you don’t like raising your DM’s blood pressure, bards make great characters for progressing through a plot. Bardic knowledge allows your DM to pass along important information in an organic way and bards have the social skills to converse with tavern drunks or court nobles without causing a brawl at either setting. Regardless if you use the powers for good or evil, bards make fantastic roleplaying characters.

Don’t think bards are the greatest class to ever fill a character sheet? Feel free to express your (incorrect) opinion in the comments.

57 thoughts on “Why Bard is the Greatest Class Ever”