Warlock vs. Wizard: Which Class is Right for You?

The magic missiles exploded across the troll’s hide with echoing blasts. “Ha ha! Did you see that you stupid Warlock?” shrieked the Wizard. In response, the Warlock snapped her fingers, engulfing the troll in a pillar of shadowy flame. “Hmph. Must have missed it,” she chuckled.

In this world, some spellcasters spend years locked away in ancient libraries, weaving delicate strands of arcane lore into the extraordinary tapestry of magical abilities and knowledge known as a spellbook. That’s Wizard.

Some go to their local cult and with a quick blood sacrifice buy into the magical equivalent of a Happy Meal: cheap and easy. That’s Warlock.

Not saying one is better than the other. Both classes have a reputation as powerful and adaptable spellcasters. But the differences are many, and will affect your decision of which class is right for you.

The Differences Between Warlock and Wizard

Our two classes on offer are both spellcasters, interacting with the game mostly through their magic. Warlock uses Charisma to cast spells while Wizard uses Intelligence.

Warlock is focused around using a small amount of spells with big impact, while casting their cantrips the rest of the time. Their spells are mostly damage spells or control spells, specializing in weakening single targets or disrupting groups of squishy enemies. Wizard will be using spells as often as possible for anything from small aesthetic effects to reality-warping showstoppers. They have a good mix of offensive spells and defensive buffs, with a toolbox of utility spells for problem-solving.

Wizard knows a lot of spells, but chooses a number of them to prepare everyday. This lets them mix up their spells for different situations, but means they need to choose wisely. Conversely, Warlock can cast any spell they know, but they know far less. They also get Eldritch Invocations and Pact Boons to round out their arsenal (you can read our guide to Invocations here and our guide to Boons here – tba).

Other than spellcasting, Warlock and Wizard also differ in their survivability. Warlock gets access to light armor and has a d8 hit dice. Compare that to Wizard who cannot wear armor and who only gets a d6 hit dice, and you can see why Warlock lives through combat more often.

If we imagined a hypothetical Warlock, she would be picking off weak targets with the support of her martial party members while trying to disable a large enemy. Our hypothetical Wizard would hide at the back of the party where he could rain down fire on their enemies out of harm’s way. But what happens if we put these two spellcasters in a room together?

For some of you, flavor differences make no difference. You want more dice rolls, bigger spells, and optimal damage. Well then, let’s look at how Warlock and Wizard compare.

Warlock and Wizard use spells in fundamentally different ways. Warlock only needs a handful of spells, so their spell list is relatively small. However, they can gain more spells through Eldritch Invocations, as well as their Pact of the Tome.

Wizard’s strength comes from how many spells they get to choose from, so it should be no surprise that they have a huge selection at all times. But with so many to choose from, they have no ways to learn new spells other than simply leveling up.

Our hypothetical Warlock and Wizard are determined to have as many spells as possible: quantity over quality. To this end, every Eldritch Invocation Warlock learns will grant a new spell, and Warlock will take the Pact of the Tome. Wizard can manually copy new spells into their spellbook to learn them, but for our purposes we will assume they do not gain any spells this way (no cheating).

Even with Eldritch Invocations, Warlock just can’t keep up with the juggernaut that is Wizard. In fairness, Wizard is known for learning tons of spells.

At lower levels, Wizard is only ever a few spells ahead of Warlock. But once we pass Level 15, that gap widens to over a dozen spells more. By Level 20, Wizard knows close to twice as many spells as Warlock.

The Dungeon Master’s Guide refers to an adventuring day as 2 short rests and 1 long rest, on average. With that in mind and the assumption that our Warlock and Wizard are taking pains to expend every spell slot they can, we can calculate a daily average.

A few things are important here:

Since both classes could theoretically spend a few hours straight shooting cantrips at practice dummies to up their daily average, we will skip any cantrip-usage in our calculation. So if both Warlock and Wizard wake up after a long rest determined to cast as many spells as possible in a day, how many can they squeeze out?

Clearly Wizard’s sheer number of spell slots wins out over Warlock’s quick-refill slots. A ton of Wizard’s spells (fourteen a day at Level 20!) come from the Arcane Recovery feature, which benefits greatly from regular short rests. Warlock only gets four spells per day from Eldritch Invocations, so there’s no contest.

At very low levels, Warlock and Wizard are reasonably even, but once Arcane Recovery starts doing some heavy lifting at Level 4, Wizard shoots up the rankings.

Spells per day is nice and all, but for Warlock in particular, cantrips account for a lot of damage. The highest damage cantrip for both Warlock and Wizard is poison spray with baseline 1d12 damage. If you want to browse all the cantrips available to these two classes, D&DBeyond has a complete list here.

However, Warlock has the powerful Agonizing Blast Eldritch Invocation which boosts eldritch blast’s minimum damage, making it Warlock’s best option. The extra damage applies to every attack, and since eldritch blast splits into multiple beams at high levels, that stacks up. Seeing as Warlock wants a high Charisma for this damage, we will assume they have the highest possible Charisma (+5) and have taken the Agonizing Blast Invocation.

The other important consideration is subclass. Warlock doesn’t get any bonuses, but an Evocation Wizard gets to add their Intelligence modifier to their cantrip damage starting at Level 10. We will assume our Wizard is a member of the School of Evocation and has the highest possible Intelligence (+5).

It’s a close contest, but Warlock barely takes the lead! Another factor to consider is that the damage from eldritch blast is much more consistent, with more wiggle room to allow for poor rolls. Wizard can only compare if they get perfect rolls all the time.

Which Class is Best for You?

If you enjoy micromanaging a spreadsheet of spells to get the optimal selection every day, Wizard is the class for you. Playing Wizard means always thinking ahead, because your low health and armor make you weak in a fight. You also have so many spell choices that you can fill several roles at once in your party if you are clever.

If you want consistent damage and enjoy seeing your party’s jaws drop when you cast a spell, Warlock is the class for you. Playing Warlock makes you sturdy enough to wade into a fight, where you are unmatched at ranged combat. You also get to extensively customize your class features, creating either a fun mix of abilities or an optimized eldritch murder-machine.

We hope this guide has helped make it easier to pick between Warlock and Wizard, two very different but equally-crazy classes. Let us know in the comments which of the two is your favorite! And if you enjoyed this guide, share it with your friends. 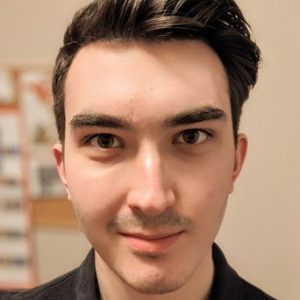 With almost a decade of D&D under my belt, I’m excited to share my knowledge and help new people discover this incredible game! Interests include: endlessly worldbuilding, seducing Strahd, and finding new and strange ways to caffeinate myself. For more of my work, check out my website!