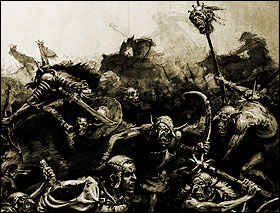 It is impossible to defeat an army of goblins in
5 rounds. It takes at least 6 rounds.

They’re called role-playing games but for most of us the fun part is killing stuff. Why else would computer games like World of Warcraft get millions of players? Because they got rid of most of the role-playing and kept all the monster bashing.

Fights break out all the time in the world of Dungeons & Dragons but they never last long – about 5 rounds according to this article about the monster creation process. The article mentions a concept that some DMs use intuitively – the threshold. The threshold is the moment in combat when the monster changes its strategy. When it’s almost dead, a monster will attempt to flee, go berserk, dance a polka, whatever. Makes sense. But Wizards proposes abilities tailored around the threshold. I think it’s a good idea and it should keep players on their toes.

Anyhow, 5 rounds for an entire combat is not nearly enough. So here is 18 ways to increase combat duration in your D&D campaign:

Let me know if this stuff works for you or if you have fought epic battles before. 10 rounds? Easy. 25 rounds? I don’t think I’ve ever managed 25. 50 rounds? Any comments, suggestions and stories are welcome.

Meet Expy The Red Dragon Expy is the mascot for DungeonMastering.com and the real mastermind behind Expy Games. He likes to hoard treasure, terrorize neighbors, burn down villages, and tell white dragon jokes.. No matter how fearful the legends claim dragons are, they always end up being defeated in 5 rounds by adventuring parties they encounter. That’s what dragons are – experience points for the heroes in your Dungeons & Dragon party. And this mascot is no different, hence the name Expy.