5 NPCs That Won’t Put Your Players to Sleep 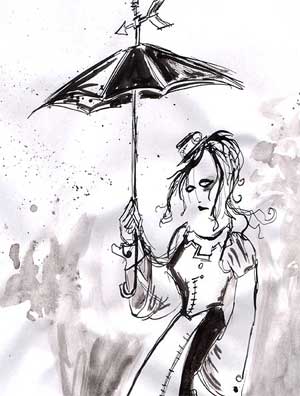 Are your NPCs drab and boring? Do they all speak with the same voice (yours) and use the same mannerisms (yours)? Do they exist only as plot hooks, sage advisors, and merchants? Then you, my friend, might want to consider spicing up your party’s social life with some three-dimensional NPCs that won’t soon be forgotten. Use this article as a source of quick inspiration when your players start to look drowsy.

Wherever this NPC goes, trouble follows. They could be a rare celestial creature, a dignitary from a foreign realm, or the child of a legendary hero. Whatever the case, they’re exciting and important, and somebody wants them – dead or alive. The PCs are tapped to serve as the target’s personal bodyguards. Can they escort the target to the destination while fending off constant attacks from the would-be assassins or kidnappers? What if the target vanishes? What if the target was in on the plot to secure a large ransom? What if the PCs are accused of harboring a criminal? Let your devious mind explore the possibilities.

The Object of Desire

This NPC could be a sultry maiden or a handsome hero who seems to be fond of one or more party members. How far will the smitten party members go to give this NPC what he or she wants? What if the fine-looking NPC has sinister intentions, like recruiting the PCs to further the goals of a dark god, or securing them as sacrifices for a bloody ritual? It’s up to the party to figure out what’s wrong with this picture and talk some sense into their love-struck pals.

This is a cruel trick, but a fun one. When the party rolls into town, they soon learn that one of them is a dead ringer for someone else – public enemy number one. Start small by having several NPCs look startled when the PC passes, perhaps even calling out to them (with the wrong name). Then have a barkeep accuse the PC of skipping out on a tab. Later, have a merchant yell at them about paying with counterfeit coins. Before long, a growing mob will tail the party, crying out for justice for everything from assault to horse-thievery. The PCs will be in a tight spot until they can prove their friend isn’t the criminal in question.

In the tradition of crime bosses everywhere, this NPC will be happy to help the party out – for a price. If the group needs money, he’ll finance their purchases. If they need strength of arms, he’ll send some muscle their way. Magic items? Information? The location of a hated enemy’s hideout? The crime lord has it covered, and he’s ready to make the PCs an offer they can’t refuse. What kinds of favors will he extract as payment? What will the PCs do if they can’t agree to his terms? Will they run away and risk the wrath of his cohorts, or will they try some fast-talking of their own?

Sometimes a dose of silliness is all you need to get your players active. You could have the PCs come upon a carnival where a fortune teller makes all kinds of weird predictions about their future love lives. Or you could have them join forces with a crazy ranger whose driving goal is to make jerky from all the exotic creatures of the world. The point of a comic relief NPC is to give the game a dose of light-hearted fun.

To whip up some quick NPC ideas of your own, check out the one-sentence RPG generator at roleplaying Tips.

How do you feel about colorful NPCs? Do they add to the game, or bog it down? Do you have some crazy NPC stories to share? Let’s see ‘em!