Adventuring Under the Sea 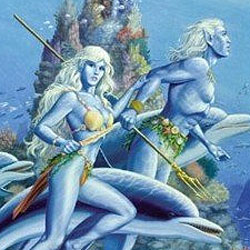 Do you remember the sea elf? I always thought it was a bit ridiculous that the designers just put elves underwater and called them sea elves. Regardless, I always liked what the sea elf represented. The possibility of adventure in the sprawling sea floor. Although sea elves are nowhere to be seen in the latest edition, the oceans still represent a vast realm to explore. In real life it is said that we know more about deep space than the deep ocean. In gaming we know more about other planes than we do the oceans of the material plane. Why not explore that rolling blue sea and the space beneath it?

When you start describing a city or landscape, odds are good that your players have already conjured up a default image. They know what the standard fantasy town or forest looks like. To make the place you are describing different, you need to fight against their expectations and change the picture they already have.

If you move under the waves, you break a lot of the standards. Players have a much less clear vision of a vast field of coral they must navigate or how a settlement works in the water. You words are defining the picture for your players instead of modifying an existing image. That is a very powerful tool.

The monster manuals are stuffed with aquatic creatures that I suspect most people seldom use. There just aren’t enough water encounters for them to make sense. With an under water game you’ll have a chance to play through that untapped rogue’s gallery. Plus you can put a new spin on traditional land based baddies. Wouldn’t it be cool to take kobolds and turn them into a race of humanoid eel creatures? Aren’t you just a little bit curious about what an underwater gelatinous cube would be like?

For those tactical gamers out there, undersea play introduces a whole new element. Verticality becomes very important for more than just a few flight powers. Characters can maneuver around, above or below their enemies. The cubic dimensions of an area attack become much more important. The possibilities open wide to the devious mind.

The underwater campaign lets players see familiar things through an unfamiliar lens. Trips to the surface world on islands, coasts and ships will be an uncomfortable voyage. The sun shines too brightly and too hot for the undersea dwellers. They must stay close to the water and stay wet in order to survive, leaving them vulnerable. Beyond the outright hostility is confusion. What would an underwater dweller make of the rain?

There’s also a very us versus them mentality. Do the undersea visitors come up and have scuffles with the pirates who sail the seas? Do they trade with merchants and hire themselves out as guides for passing vessels. There is a potential for interesting relationship we don’t consider from the other side.

Of course, an undersea campaign does take some work and house ruling. You need to come up with underwater player races, figure out how certain powers, such as fireball, would work and how the vertical battles impact opportunity attacks. The task would take some tweaking, but many of the challenges seem interesting and there is a whole new world of possibilities beneath the waves.

Have you ever done an undersea campaign? Was it more like The Little Mermaid or Call of Cthulhu? Tell us about it in the comments!

6 thoughts on “Adventuring Under the Sea”