Elements of Fear: Horrific Ideas for your Campaign

Fear is fun. If fear was a real bummer, there wouldn’t be such a demand for scary movies and horror fiction. The same goes for role-playing games. Though horror-genre RPGs haven’t gained the widespread acclaim that their sword-and-sorcery counterparts have enjoyed, they do have droves of dedicated followers.

As a DM, you have the opportunity to inject elements of horror into your game. What follows is a small collection of ideas that you can develop and use in your own campaign, regardless of the setting. I’ve also included tips for getting the PCs involved in your sinister plots. Enjoy!

Fear of the unknown is a potent form of fear. It’s arguably the source of all fears. If you want to creep out your PCs, you have to disrupt their sense of familiarity and challenge their understanding of the way the world works. That can be a hard job for a DM; there’s always that one know-it-all player who’s memorized every monster ever published, along with its vulnerabilities and what it likes for breakfast. Nothing shocks them anymore.

Unless you bring in a totally new threat. Design a nasty monster, plague, or alien entity that threatens the party’s well-being. The threat could be a local one, or it could span the entire region. The PCs must figure out how to defeat it, because it’s something the world has never seen before.

If you opt for a monster, it could be a native creature that hasn’t been seen in many generations, or something entirely new to the world. A plague could have horrific symptoms such as turning its victims into mindless gelatinous monstrosities or compelling them to destroy themselves and everyone around them. Alien entities could come from another planet or another plane of existence. For fear-of-the-unknown inspiration, revisit 1978’s Invasion of the Body Snatchers or Raymond Feist’s Magician: Apprentice.

And never underestimate the power of darkness. Remember the video game Silent Hill? It proved that creepy crawling flesh monsters are even creepier when you can’t see them coming. Obscure your party’s surroundings with dense fog or supernatural darkness to keep them on their toes.

Motivating the PCs:
The threat of extinction at the hands of a nasty monster or disease is enough to motivate PCs of any alignment.

“When the stars are right, something’s horribly wrong.” 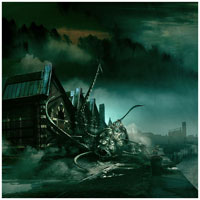 It’s an old stand-by, but it’s also fun: An ancient evil has awakened, and it’s up to the PCs to put it back to sleep. This type of plot is very flexible. The antagonist, who we’ll call Big Baddy, can wake up and cause direct havoc by crushing the world beneath his heel (ala the Tarrasque). Or his awakening can be prophesied for sometime in the near future, and the PCs can run amok gathering items and ancient texts to keep that from happening. Depending on the party’s level, the bad guy could be a demon, a powerful outsider, the avatar of a tyrannical god, or something of your own devising. For inspiration, thumb through some of H.P. Lovecraft’s Cthulhu stories.

Motivating the PCs:
If you’re running a good and heroic campaign, the PCs will feel compelled to save the world. Up the ante by giving them a time limit. Can they stop the creature in time? Play up the world-changing nature of the antagonist’s awakening. Will the world ever be the same again? Will his arrival bring other cataclysmic events?

Evil parties might try to find a way to team up with Big Baddy; maybe they could start a cult dedicated to the creature, or even find a way to enslave Big Baddy and put him to work for them.

“Wh-what was that noise?”

And now we move from horror on a grand scale to a study in personal fear. A paranoia plot can take many forms. In its simplest form, it can involve an NPC who has long been a trusted ally to the party. But now his loyalty has changed, and he’s feeding information to the very group the party is trying to defeat.

On a grander scale, you could create a vast conspiracy that spans whole regions, factions, and religions. The PCs’ actions have offended a power base with far-reaching influence, and now a network of spies is watching their every move. Anyone, anywhere, could be an agent of this evil organization. Whichever depth you take it to, the result of this plot is the same: the PCs come to realize that their actions are on display.

They learn of this treachery in a variety of ways: their enemies are mysteriously prepared for any and all surprise attacks; people who talk to the party end up dead or missing; and even their loved ones back home have been threatened or killed. For inspiration, think of the Illuminati-esque council from the X-Files, or the network of darkfriends from Robert Jordan’s Wheel of Time series.

Motivating the PCs:
The motivation is pretty much the same for groups of any alignment. Good or evil, having a sinister network plotting your downfall will seriously cramp your style. Figure out what your PCs hold most dear – honor, power, riches, magic – and have the dark organization strip it away bit by bit.

Remember: the most effective way to scare the PCs is to keep things personal. Endanger their well-being and the things they care about, and you’ll have no problem getting them to engage with your horrific antagonists and their shadowy agendas.

4 thoughts on “Elements of Fear: Horrific Ideas for your Campaign”